Darmstadt in a nutshell

Darmstadt has roughly 155,000 inhabitants and thus holds around rank 50 of Germany’s largest cities. Together with Frankfurt on the Main which is only about 30 km to the north, Darmstadt is part of the metropolitan area Frankfurt/Rhine-Main, the so-called Rhine- Main region with several million inhabitants..

Darmstadt holds the epithet “City of science”, a title recognising outstanding achievements in research awarded to only three cities in Germany:

Since 1969, six super-heavy elements have been synthesised for the first time in the accelerator unit of GSI (Society for Heavy Ion Research), including the elements “Darmstadtium” and “Hassium” named after the Latin name Hassia for Germany’s federal state Hesse.

Darmstadt is not only home to EUMETSAT, the operator of the European meteorological satellite, but also to the ESA (European Space Agency) whose control centres in Darmstadt monitor, among other things, missions to Mars and the orbits of numerous satellites as well as the trajectories of around fifteen thousand chunks of ice and rock which might pose a risk to planet Earth.

A quarter of Darmstadt’s inhabitants are students attending one of the three universities (Technische Universität Darmstadt, h_da or EHD).

Jugendstil (around 1900 - 1920), also called “Art nouveau”, is a period of art history characterised by renunciation of historicism and a countermovement opposed to the emerging industrialisation. 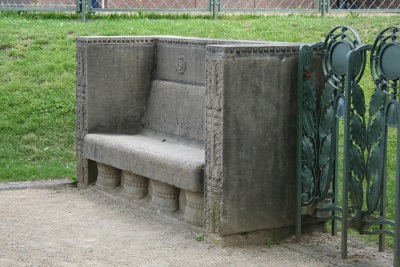 Jugendstil is dominated by floral patterns, curved lines and in general by an absence of symmetries. In 1899, Grand Duke Ernst Ludwig of Hesse invited seven Jugendstil artists to Darmstadt who lived and worked as an “artists’ colony” on Mathildenhöhe. 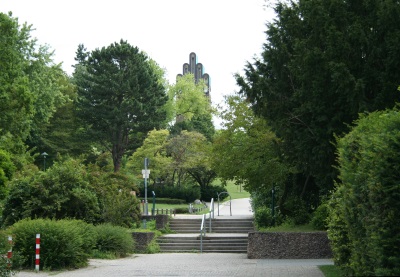 Jugendstil architect Joseph Olbrich gave Darmstadt its landmark, the Wedding Tower designed by the Austrian artist to commemorate the wedding of his patron the Grand Duke.

Other styles are prominent throughout Darmstadt, too — for example historicism, also called Gründerzeit style, which is characterised by a combination of older styles such as Romanesque, Gothic or Baroque. The “House of History” with its architecture resembling a Greek temple is a good example for this style, see Attractions.

In the so-called firestorm of 11 September 1944 Darmstadt was largely razed to the ground by the British air force. Within only thirty minutes, thousands of demolition bombs and hundreds of thousands of incendiary bombs were dropped, in particular onto the densely populated historic centre.

A monument located between Weißer Turm and the palace as well as the annual bell striking on 11 September commemorate the many thousands of victims.

The inhabitants of Darmstadt are often called “Heiner” - though nobody really knows why.

“Datterich” is another term you might come across quite often when visiting Darmstadt. The play by the same name written by Ernst Niebergall in 1841 is in the dialect of southern Hesse and set in Biedermeier-era Darmstadt. 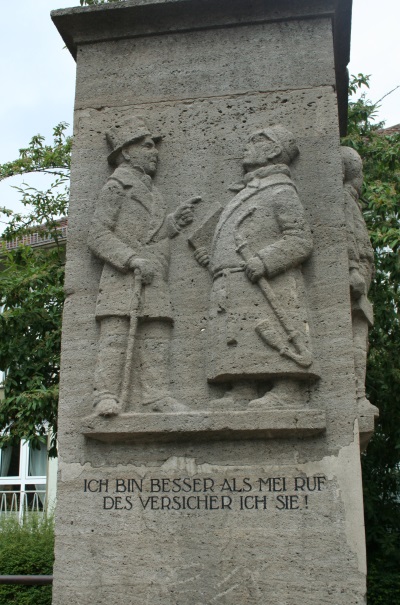 The origin of the name Darmstadt is not very clear either. The settlement was mentioned as “Darmundestat” as early as in the 11th century.

Anyone hoping to understand why so many female names can be found in Darmstadt needs to know that Hesse-Darmstadt used to be a grand duchy for a very long time, comparable to a small kingdom. All of the grand dukes of Hesse-Darmstadt were called Ludwig. Many institutions were named after the wives and daughters of the grand dukes, for example Luisenplatz, Karolinenplatz, Mathildenhöhe and many more.

A visit to Darmstadt is like a journey through the centuries, starting from the Middle Ages to Classicism in the early 19th century and the follies of the late 19th century including the Jugendstil era up to Neoconstructivism and the style of the Hundertwasserhaus. Most of the attractions are close to each other and within walking distance - just like, for example, the attractions in Bavaria’s capital Munich. 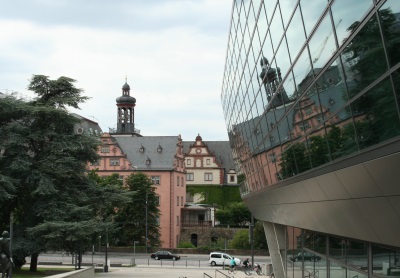 Luisenplatz is the central hub of Darmstadt. Anyone crossing the city from one end to the other by means of public transport will most likely go via Luisenplatz or even change there. A tunnel below Luisenplatz makes sure that other traffic can largely bypass the city centre.

Right in the middle of Luisenplatz Square there is a monument commemorating Ludwig I. It is almost 40 metres high and often called “Long Ludwig” or “Long Lui”. 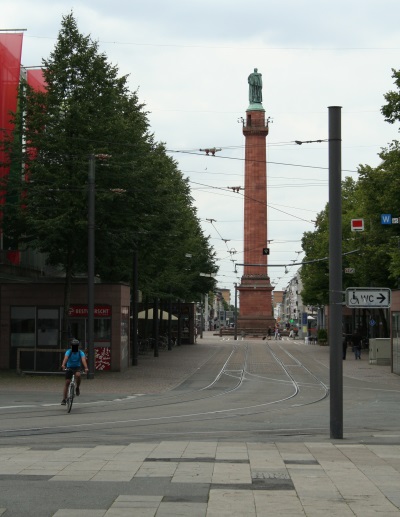 Long Ludwig on Luisenplatz, seen from the palace 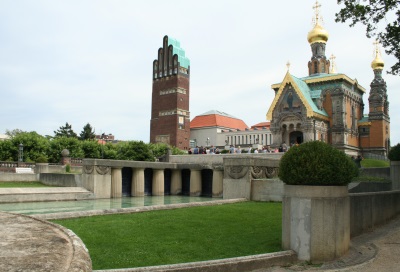 Mathildenhöhe, which was mentioned before, not only boasts the Wedding Tower (Five-Finger-Tower), but also a Russian chapel in 16th century style. It was commissioned by Russia’s last tsar, Nicholas II, for himself and his court a few years after his marriage to Alix of Hesse-Darmstadt (1894). 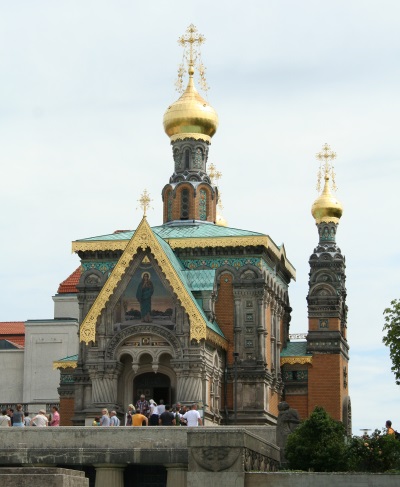 On Market Square, which is lined by all types of gastronomic facilities, the Old Town Hall and the Palace face each other. 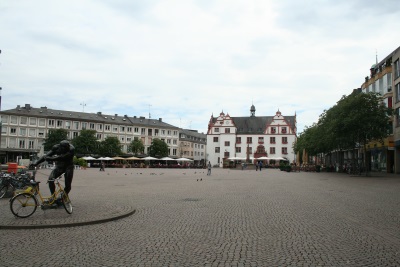 Market Square with the Old Town Hall in the centre 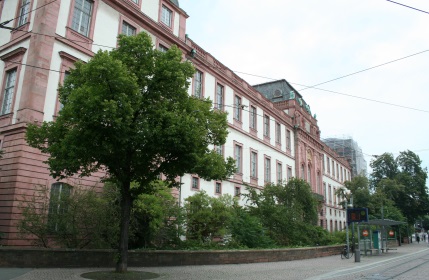 The Hessian State Archive located in the “House of History”, whose appearance slightly resembles a styrofoam construction, is a former theatre and also named “Moller-Bau” after its architect. It is modelled after a Greek temple and was constructed in 1817 when the return to classical work and ancient culture was at its peak during Classicism.

Karolinenplatz Square with “House of History” and darmstadtium 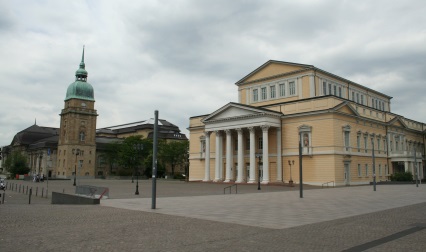 The State Museum can be seen from Karolinenplatz as well. Together with the “back” of the palace it creates the feeling of travelling in time depending on where you look. The museum building with its two bronze lions at the entrance was opened in 1906. 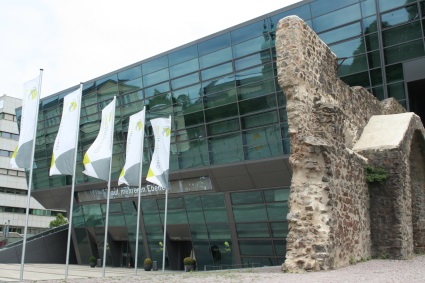 Darmstadtium is a congress centre opened in 2007. During construction works further remnants of the edieval city wall were discovered and simply integrated into the building’s architecture.t.

Waldspirale is a residential complex designed by Friedensreich Hundertwasser and is famous for its olden onion domes, colourful paint and the rejection of traight lines and corners.

Jugendstilbad combines historicist/neoclassical outside architecture with Jugendstil décor on the inside. Taking a look inside is well worth it!. 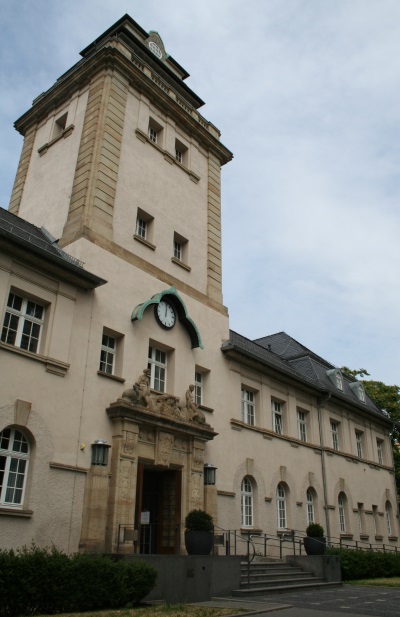 At the end of Lindenhofstrasse remnants of the medieval double city wall can be seen which integrate into the last remaining defence tower. Today, "Hinkelsturm” tower houses the Old Town Museum boasting a model of the historic city centre before its destruction during World War II.

Almost every major city in Germany is on a large river. Darmstadt isn’t. However, the little stream Darmbach “runs” through Darmstadt. 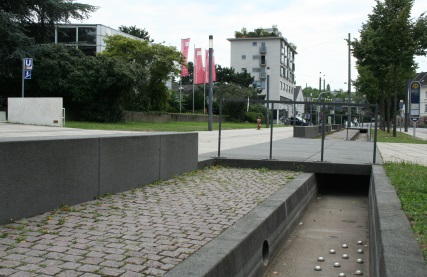 Darmbach in summer, not visible on the lower right

Darmstadt’s major fairs are Heinerfest (June/July), Schlossgrabenfest (May), the Wine Festival as well as the spring and the autumn fair.

The large flea markets are worth a visit as well: the night flea market on Karolinenplatz Square (late April), the flea market in Bürgerpark Nord (early August) as well as the
backyard flea markets “Fundstück aufm Grundstück” in Martinsviertel district (June) and “Flohannes” in Johannesviertel quarter (August). Information subject to change.

Information on other events can be found on the website “Partyamt” and the free culture magazine “P”.